Why You Should Stop Trying To Meditate

Meditation isn’t a doing. It’s a non-doing. “Trying to meditate” is counterproductive. But that doesn’t mean you should take it off your to-do list.

Here at www.meditationmag.com, we have a pretty consistent flow of traffic. Our visitor count doesn’t usually fluctuate much from day to day. But on January 2nd, 2018 — just like last year — we saw a huge spike in our traffic! Our page views nearly doubled in one day, and then slowly tapered off, back to normal, by January 5th.

On New Years, every year, people make resolutions to do a million different things. Lose weight. Write a book. Ride a unicycle. And then slowly, the resolutions fade away, swallowed in the fog of time, losing priority to the urgent tasks of daily life.

Over the past few years, meditation has burst into the public consciousness for its myriad of health benefits. And so it’s not surprising that for New Years 2018, many people have made “meditation” one of their new years resolutions.

That all sounds great — but there’s just one tiny problem.

When we add more tasks to our to-do-list, we’re making our lives busier, more stressful, more future-oriented and less “present.” And that’s what makes “trying to meditate” so amusingly, infuriatingly ironic.

Why You Should Stop Trying to Meditate

The whole point of meditation is to stop running around, stop trying to do a million things, stop distracting yourself from this beautiful moment of being alive, and just be here, appreciating this moment of Existence, as it is, in its beautiful, epic, imperfect infinity.

Meditation is the practice of shifting from a state of “doing” to a state of “being.” So, ironically, when you “take action” and “try to meditate,” you’re actually doing the opposite of meditation. You’re trying to do something, instead of just being.

To our western minds, this is maddening. All we’ve been taught is “if you want something, go get it.” But what do you do when every attempt to get what you want causes the object of your desire to move further from your grasp?

Wu Wei – The Art of Non-Doing

Wu Wei is the ancient Taoist art of non-doing, or non-interference.

It doesn’t mean that you shouldn’t do anything; after all, if everyone did nothing all the time, we would all die of thirst and starvation, while covered in a bunch of disgusting stuff that I’m not even gonna mention over here.

Rather, wu wei is more like “going with the flow” of nature. The great 20th century philosopher Alan Watts often used sailing as an example, to illustrate the principle of wu wei. Instead of spending a ton of energy trying to row across the sea, all you need to do is put up a sail and let nature do the rest.

To experience the power and beauty of meditation, we need to practice wu wei. Just set up the conditions and let nature do the rest. Just sit down in a quiet place, close your eyes, and stop trying to meditate.

How do you meditate without trying to meditate?

The answer is… you don’t. The Universe meditates you.

But seriously, if trying to meditate is counterproductive, what do you do after you sit down in a quiet place and close your eyes?

When spiritual aspirants came to Osho and asked him how to meditate, he would reply,

“Remain unoccupied” is perhaps a more helpful way of saying “do nothing.” While “do nothing” and “non-doing” bring to mind the idea of frozen movement and inaction, “remain unoccupied” is better at capturing the spirit of wu wei. Even “sitting” and “closing your eyes” is doing something. But by remaining unoccupied, you’re able to fully experience this moment, without resistance, without interference.

So you don’t even need to try to meditate. It’s impossible to go out and chase the Universe. If you just sit down, close your eyes, and remain unoccupied, the Universe will come to you.

Meditation isn’t a doing. It’s a non-doing. But that doesn’t mean you should take it off your to-do list.

In the moment of meditation, you don’t need to do anything. Do nothing. Wu wei. Remain unoccupied, and let the Universe come to you.

But for most of us, most of the time, daily life is full of action. There’s stuff going on all the time, and we’re running around trying to stay on top of it. Keeping meditation on your to-do list gives you the opportunity to stop, sit down, maybe set a meditation alarm, and let Existence do its thing.

All you need to remember, as you’re sitting down, is that to stop trying to meditate.

A Guided Meditation In Non-Doing

Justin Brown, the creator of ideapod.com, recently created a meditation video that broke the internet. Well, OK, it’s no What Does The Fox Say, but Justin’s video has garnered over two 200,000 views on Facebook since it was released a few weeks ago. Which is quite an achievement for a 3-minute meditation video.

The power in Justin’s video is that it looks past the standard “meditation techniques” and peers right into the heart of meditation: wu-wei. Non-doing.

Justin mentions in the video that he had tried “active” meditation techniques before, and they hadn’t worked well for him. “Meditation turned into a task,” he recalls. “I was trying to achieve something, and it kind of took me away from that meditative state.”

Eventually, Justin found an awesome audio clip from Alan Watts, about the non-doing, wu-wei way of meditation, and made it into this really powerful 3-minute guided meditation video:

Of course, there are many different kinds of meditation. Some “active meditations” have been around for thousands of years, and have helped millions (or billions?) of people experience inner peace, oneness with the Universe, awakened consciousness, and spiritual enlightenment.

Which type of meditation is your favorite? Do you think that some are “better” or “more meditation-y” than others? Let me know what you think in the comments 🙂

Mary Grace
in  How To Meditate

Brett Cotter’s Into the Void Meditation

Brett Cotter’s Into the Void Meditation

Isabelle Baker
in  How To Meditate
Tags: breath, child, kids, meditation, mindfulness, mommy and me, patience

What is Reiki Meditation? 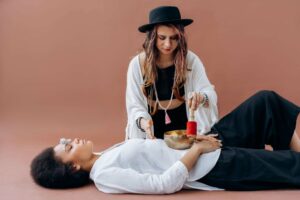 The ancient practice of sound healing has many modern benefits and is a great...
November 19, 2020 · 1 min read

Meditating with Animals for Deeper Understanding

Kevin Ellerton
in  How To Meditate

Meditation can help you overcome anxiety, depression, and ADHD (among other things), and become...
June 24, 2020 · 9 sec read

Reflecting The Elements: The ChinTwins

These are crazy times with Coronavirus spreading across the globe.  Being quarantined can feel at...
April 21, 2020 · 3 min read

7 Ways To Live Within Your Power