I recently received a wonderful mantra that induced soothing comfort and helped me roll through a difficult situation and move forward in my life.

I’ve shared this mantra with other people who enjoyed similar benefits.  I would like to take this opportunity to share it with you.  The mantra was many decades in its making.  A good starting point in its story begins in 1968 when I was a grad student at Yale University.  Because I was struggling with the program and dealing with low self-esteem and lots of anger, I decided to learn how to meditate. Meditation made a huge difference in my life, including enabling me to earn a PhD in drug research in record time.  Later, in 1973, I went to hear Ram Dass speak at Duke University.  While sitting in the audience, I could feel amazing waves of positive energy emanating from him.  I had the feeling that I had come home.  Everything felt wonderfully comfortable and joyful.

It was a transformative experience.  Other than a plaid blanket, Neem Karoli Baba had no possessions.  He rarely accepted gifts and wanted nothing from his disciples.  In fact, after people experienced the miracle of his pure love-essence, he often sent them away.  They left now fully aware of their own core of love and carrying some of Maharajji’s energy with them.  After studying with Maharajji for many months, Ram Dass had visa problems and had to leave India. Maharajji told Ram Dass he would take him to America (he did not mean his physical form).

Accordingly, Ram Dass became a channel for Maharajji.  It was Maharajji’s energy I and many other people felt when Ram Dass spoke even though Maharajji was no longer living.  It transformed us in very positive ways.  I eagerly and intensely studied Ram Dass’s teachings for several years.  I attended his talks whenever he returned to North Carolina, listened to his tapes for hours every day, went to weekly meetings with his local devotees and monthly retreats with one of his direct students.  During this period, I had a daily spiritual practice that almost fully occupied my time when I wasn’t working as a research scientist.

It was a full immersion experience. There was no talking or eye contact.  The first meditation session started at 3 AM and the last one ended at 12 midnight.  Ram Dass gave talks and led practices during the day.  On day-five, he was sitting at the base of a gentle hill and 350 of us were on the hill listening to him.  All of a sudden, Ram Dass disappeared and Maharaj-ji was sitting in his place wrapped in his plaid blanket.  I was overwhelmed by the experience and tears were running down my face.  His words were flowing in waves of tangible energy.  They felt like entities of truth as they landed on me.  He was saying, “Take the energy of the guru and go beyond it.”  Wow, the guru materializes and tells us to go beyond the experience of him.  It was so powerful, and I was in ecstasy.

The guru provides intermittent reinforcement on our spiritual paths for us to discover what we see in him/her actually resides within ourselves.

The next day I attended one of the workshops led by Sruti Ram.  On these occasions, we were allowed to ask questions.  A person raised his hand and said, “You have to tell me what happened yesterday.  I was watching Ram Dass and he suddenly turned into Maharajji.”  Another person said, “I saw the same thing! How many saw Maharajji materialize?” At least 7 of the 10 people in the room raised their hands confirming they also experienced the miracle.

During this retreat, I had a magical meeting with Elisabeth Kübler-Ross, a pioneer teacher who described the 5-stages of dying and made people comfortable discussing the topic. I immediately felt a strong connection with her and her work and started teaching meditation to seriously ill people when I returned home.  I soon expanded my teaching to include all people and added healing techniques to find relief from stress, worry, anxiety, pain, fear and guilt.  I’ve been doing this in addition to my medical research for decades, which brings me to recent times.

I’m an avid mountain bike rider and was riding single-track trails with my wife, Joie and friend in November 2020 when I had a serious accident. I flew over the handlebars and landed on my back on the corner of a railroad tie and rolled over gravel.  I managed to get back on the bike and coast the short distance to our car. I thought I had broken a rib or two and just needed some time to heal.  However, that night when I got in bed, I knew I had some serious troubles. The next day Joie drove to Urgent Care where I learned I had three displaced rib fractures, two fractured vertebrae, a hair-line foot fracture, a lacerated liver and a partially collapsed lung.  They wanted to call an ambulance for me, but we figured Joie could drive to the hospital even faster.

The Emergency Department medical staff were very concerned. They had me lie flat on my back and performed many tests to see if I had spinal cord injuries. Although I was in severe pain, I declined any narcotic pain medicine because they had previously caused intense itching and I also wanted to feel what the pain had to tell me. I’ve learned to respect and to listen to pain as it occurs.  I settled for iv Tylenol.  I was admitted to the Trauma Ward and spent the night there.

The next morning at 5:30 am, a technician came in with a portable x-ray machine to assess any medical changes.  Shortly after he left, everything changed. I felt the strong presence of Maharajji right there in my room.  He filled the entire room with golden light and then concentrated the light into a beam and focused it on my chest. I could actually feel the light filling my body and internal healing taking place.  I was totally blissful.  Shortly thereafter, the Head Trauma Doctor entered my room.  He thought he was in the wrong room. Expecting to see a broken up 76-year-old man too stupid to take pain meds, he saw me sitting up and smiling.  “We’re concerned,” he said. “The x-ray showed the amount of your collapsed lung has increased.  We need to place a drain tube in your chest and keep you here for a few more days. We’re taking you down to x-ray to better assess the affected area.”

The doctor returned a 9:00 am, scratching his head. “The x-ray shows your collapsed lung is now ok.  You can go home”.  Two weeks later, the rapid healing was continuing. I was feeling great by the time I visited a well-known spinal specialist.  He told me a young person would heal in 3-4 months.  However, healing would take more like 6 months for a person my age.  The good doctor meant well but did not know about Maharajji’s miraculous healing powers.  I was back on my bike in less than 2 months after the accident.

I was thoroughly enjoying mountain bike riding, backpack training and backpack trips for several months until May 7th when I was scheduled for surgery for an unrelated issue.  I woke up after the procedure in severe pain. Apparently, the surgery was successful, but several unexpected complications were playing havoc with my body.

I quickly learned I was not going to experience another miraculous healing.  I had to go through this one the old fashion way, slowly and with lots of suffering.

However, grace was not far away.  As I lay in bed surrounded by the overwhelming sound of three iv pumps pushing fluid through my body, I received a mantra. It just came to me out of the blue; ‘Neem Karoli Babaji’, the guru’s name with ‘ji’ at the end. ‘Ji’ adds respect to a name as with Maharajji.  I never heard Maharajji’s full name with a ‘ji’ before, but it was perfect.  As I repeated the mantra, everything seemed to flow with ease, and I was able to roll with the pain.  In his own way, Maharajji did it again.  I continue to use the mantra and have repeated it for people who were in pain or highly stressed.  All found it comforting.  Some have adopted it for their own use.  I suggest you give it a try for yourself.  You may find it comforting, soothing and helpful to get through difficult times and keep your life rolling forward. By his grace, Maharajji may visit you too.

Most species experience two states in their physical body, either awake or asleep. In...
September 24, 2021 · 4 min read

How Meditation Helped Me Find Refuge From Addiction

Loving Orlando was easy. The hard part was continuing to love when he succumbed...
August 23, 2021 · 9 min read 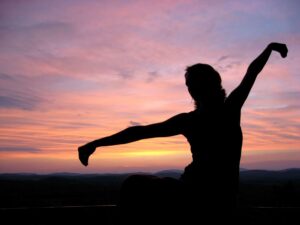 Before I discovered the physical aspect of Yoga in my early twenties, meditation and...
February 8, 2021 · 5 min read

As someone striving to find balance in life and build inner peace, meditation and...
January 8, 2021 · 5 min read

Saying that 2020 has been challenging would be an understatement. Between the uncertainty, stress,...
December 18, 2020 · 2 min read 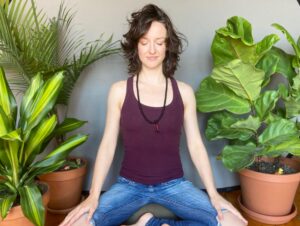 The Meaning of Meditation I’ve learned that meditation is much more than what you...
November 23, 2020 · 3 min read